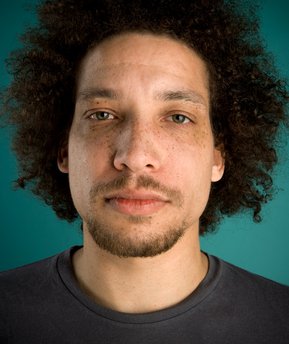 Franklin De Costa’s invaluable presence on the dance music scene hails back to 1996, when he was releasing his first records on his own label: Fusion Records. By the end of the decade, Franklin had released various EPs on Frankfurt techno labels under his Tichy moniker.

His search for inspiration brought him to a very experimental production phase without the “4 to the floor“ preset, a phase which sparked his trademark sound of straight grooves and frisky acoustic design.

De Costa is not only a studio pro and well respected DJ, but an event organizer as well. In 2003 he started working with Yapacc and founded the Studiogemeinschaft project. Along with the infamous Frankfurt DJ's Bo Irion and Miriam Schulte they stablished “The Green Empire” events in Frankfurt.

Meanwhile, Franklin was gaining more international recognition with releases on well-known labels such as Trapez ltd, Karmarouge Noir, Einmaleins Musik and Treibstoff. His singles have been charted by renowned DJ's worldwide. With over 15 years of touring around the world with techno on his shoulders, Franklin still lightheartedly follows his funky vision of dancefloor deepness.

Currently, the artist is also exploring the field of live performances in addition to his DJ sets. Last year, he kicked off two new side-projects: DCNT and Mudkid. He also has new releases under his name planned on Curle Music, Connaisseur, Hypercolour and others as well as remixes for producers like Holger Zilske, Kris Wadsworth and René Breitbarth.

February 28th, we will present The Buran Program at WORM Rotterdam. Inspired by the cosmos and astronomy, we will take you on a journey to a new universe where people dance weightless into the wee hours.

The Buran Program is Rotterdam's very own space program, a project where together we will travel into the deepest depths of the musical galaxy. Progressive artists will guarantee an infallible trip. A true experience for house music addicts, as well as an exploration for anyone who dares to join. 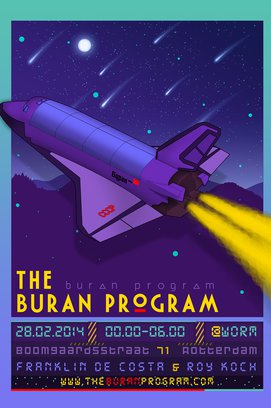 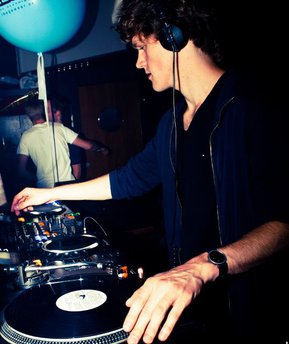 Roy Koch is an up-and-coming artist from Amsterdam. He is well known for his deep sounds and big vinyl collection. We can assure you, that you will be hearing new and old bangers that you have never heard before.

Lately Roy is playing at a lot of gigs all over Europe. He also became a resident at the Abstrakt crew from Amsterdam. Check out the podcasts he recorded for Sonus Discis (Bucharest) and Faciendo (London) to get a taste of what this vinyljunkie is up to.

The Buran (Russian: Бура́н, IPA: [bʊˈran], Snowstorm or Blizzard) program was a Soviet and later Russian reusable spacecraft project that began in 1974 at TsAGI and was formally suspended in 1993. It was a response to the United States Space Shuttle program.

The project was the largest and the most expensive in the history of Soviet space exploration. Development work included sending the BOR-5 on multiple sub-orbital test flights, and atmospheric flights of the OK-GLI. Buran completed one unmanned orbital spaceflight in 1988 before its cancellation in 1993. 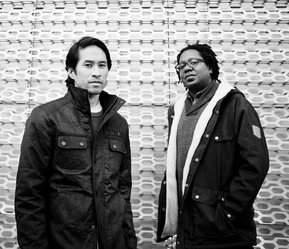 Traversing across the metaphysical into the physical and back again, the sound of Innerspace Halflife abstracts traditional notions of Chicago House while retaining the source's raw and improvised edge…

A collaborative project formed between Chicago's Hakim Murphy and Ike Release, Innerspace Halflife has developed its distinctive, cosmic and idiosyncratic sound through a series of well-received vinyl releases appearing on esteemed international record labels, MOS Deep and Skudge, as well as their own labels Machining Dreams and Episodes in limited and highly-sought after editions. In addition to their acclaimed productions and remixes, the duo's live performances are becoming increasingly in high demand showcasing their brand of raw, jacking, cerebral dance music. 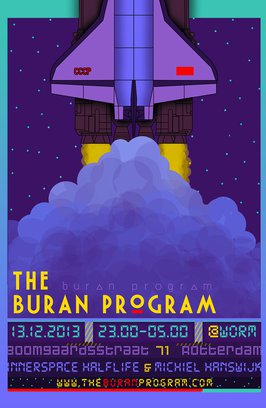 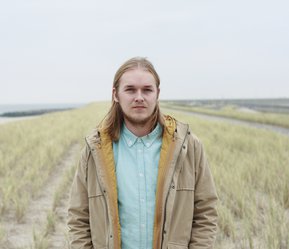 Michiel Hanswijk is an up-and-coming deep house dj from Rotterdam. His style is characterised many Berlin influences.

As part of The Buran Program crew, Michiel Hanswijk is one of our resident dj's. With his deep and unpredictable sound he will keep everybody's attention to the dancefloor.